Various Exceptions And Solutions Of FR4

FR4 epoxy insulating board is a new type of review material made of glass fiber cloth and resin. The fusion of the two materials during the processing and production process will cause some abnormalities. The production department must deal with various abnormalities in time. To ensure the excellent quality of the product, we have sorted out the following situations of abnormal quality of FR4 sheets and corresponding solutions. 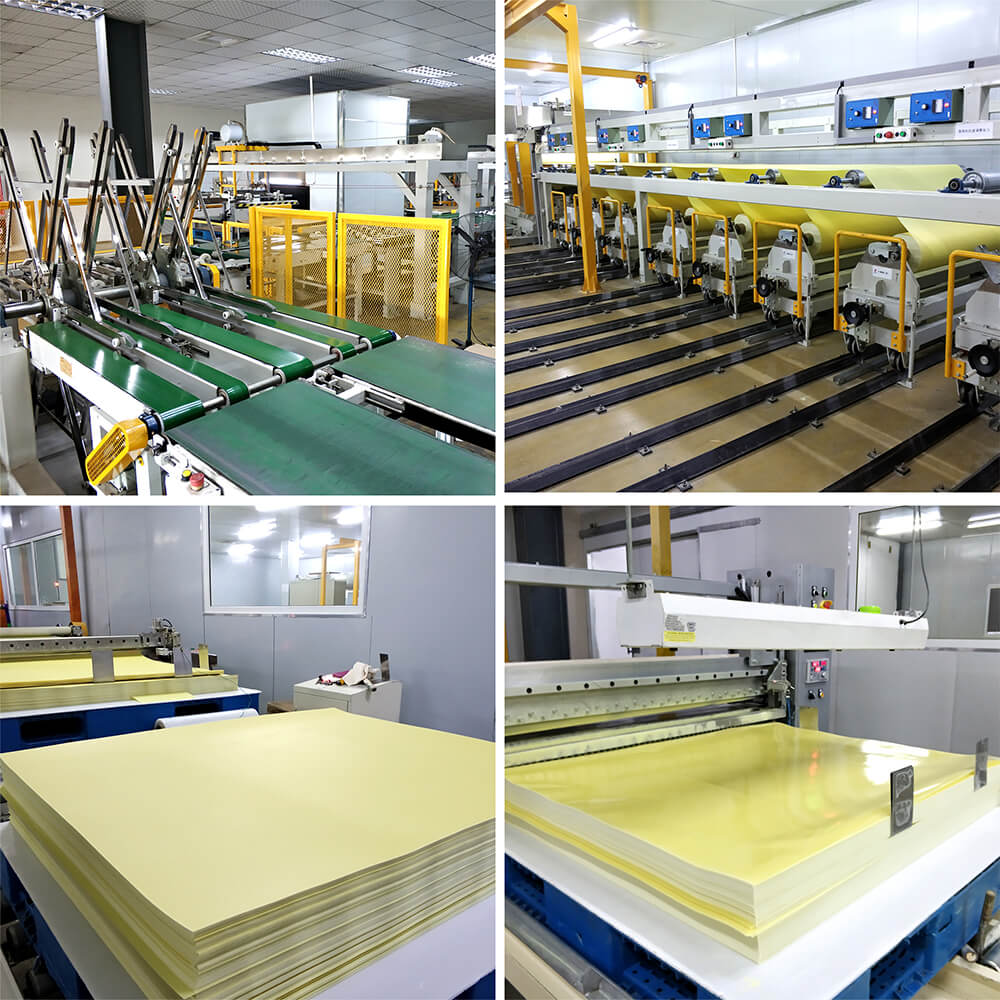 Analysis of the cause: DRY is a very headache problem, and there are differences in degree. The severe case is general dryness, and the mild case occurs in the corners. The cause may be the poor compatibility of the Coupling Agent of the glass cloth and the resin. Poor adhesion. In addition, it may be that the film is overcure so that the resin fluidity is not good during pressing. If the resin flow of the film is found to be low, it may be that the substrate is dry The precursor of the DRY substrate is prone to delamination during the solderability test.

Solution: If the problem is the surface finish of the glass cloth , you must ask the glass cloth supplier to improve it. If the glue flow is low, you can reduce the gel time of Varnish or increase the gelation of the film Start in terms of time and glue content. If DRY is not serious, it can be corrected in the pressing process, such as increasing the heating rate, pressing up in advance, increasing the pressure, etc., but the effect of this modification of the operating plan of the pressing process has not been adjusted And the effect of improving raw materials is good.

Reason analysis: When the glue flow of the film is too high or the moisture is absorbed due to poor storage conditions, it is easy to cause the increase of the pressure flow when the film is heated. The resin is anisotropic when the film is heated. ) Spreads from the center to the periphery. Therefore, the edge flow is large, and the water content of the glue is also low. When this part cannot be completely avoided, a textured white corner and white edge will appear. Another possible reason The heating rate is too fast, which causes a large temperature difference between the inner and outer layers of each Book and uneven flow of glue. When pressing, there is a slight slippage and white corners and white edges. In addition, there are many tiny bubbles and glue holes in the microvoids, when the glue flow is low, the bubbles are only driven to the edge of the board and cannot escape the board smoothly, and white corners and white edges will also appear.

Reason analysis: MCB is mainly caused by tiny bubbles that do not escape completely and remain on the board. When a non-vacuum press is used for pressing, MCB often presents a random distribution. If a vacuum system is used, MCB only occurs in The corners sometimes appear line-like, such as when the area is too large to be removed, it will become WAC/WAE. In addition, if there is a vacuum system leak or improper pressing conditions, the resulting glue flow will be too low. Form this kind of MCB.

Cause analysis: If the film is pressed due to insufficient hardening or poor storage conditions, and absorbs too much water vapor, it is easy to cause a lot of glue flow, resulting in low glue content and reducing the bonding force between the glass cloth and the resin. Gravity will evolve into layers. In addition, excessive hardening of the film and low flow glue during lamination may also cause delamination. This is similar to the reason for DRY.

Solution: Strengthen the Wet Out effect of glass cloth and increase the glue content. The white spots caused by insufficient hardening can also be solved by increasing the hardening time.

Reason analysis: The reasons for these two situations are quite similar, but the impacts are different. If it occurs on the surface layer, the glass cloth may not be completely covered, and the pattern of weaves is revealed. If it occurs inside the middle layer, a local lack of glue will occur.

Reason analysis: Usually the substrate is thick in the center and thin in the edge due to the pressure of the glue. However, the average thickness still needs to be within the specifications. Thickness deviation is often due to the high glue flow of the film and the large flow of glue during pressing, which reduces the glue content, thus forming a low thickness. In addition, the method of film combination also has a considerable impact on the thickness. If you want to achieve a certain thickness, there may be several different options for the number of films and the type of cloth, and the glue content is also different. It is easy to cause thickness deviation.

Solution: The thickness is too low due to the excessive flow of glue, which can be adjusted through the gluing conditions and the pressing operation cycle . As for the thickness deviation caused by improper combination, it needs to be corrected and adjusted by experience and experiment.

Reason analysis: The rate of heating up or cooling down is too fast to cause internal stress of the substrate. This internal stress can not be completely released, and it is easy to form W/T. When using non-vacuum compression, in order to completely drive the bubbles Out, the pressure usually used is relatively large, so W/T is more likely to be generated. This is especially noticeable for thin core . In addition, once the film stacking direction is wrong, improper combination or use of deformed steel plates, cover plates, backing plates, etc., may cause W/T.

Solution: The W/T generated by the temperature rise and fall too fast can be started by reducing its temperature change rate and adding “Post Bake”. As for the W/T caused by improper combination or deformation of steel plate, it is necessary to prescribe the right medicine for individual reasons and improve it.

Reason analysis: The problem of PND is a basic problem that has not been completely eradicated in the production of insulating boards. Any particles such as dust on the edge of the film due to static electricity, residual glue on the steel plate, scale, dust falling in the air, and copper foil residues, etc., as long as they adhere to the steel plate, they will eventually have different forms and sizes. PND.

Solution: The immediate and effective method is to find the problematic steel plate, and re-grind and clean it before putting it on line. The fundamental solution is to minimize personnel contact and exposure time. Therefore, tasks such as stacking, assembling, and copper foil cutting must be automated in a clean room. In addition, the installation of static elimination devices, automatic stacking and combination systems, conveying lines, and measures to maintain the cleanliness of the workplace and reduce dust and dust are all methods to reduce PND.

Reason analysis: For manufacturers using hot-air oven gluing machines, DFM is a big problem that cannot be completely eradicated, because in the process of driving baking, the residual glue is often easily adsorbed on the oven wall and the hot air outlet of the oven Nozzle And the air ducts become black small black dot-like carbides. As long as they are not completely removed, they will fall on the film with the hot air spots. In addition, any foreign matter on the glue area such as mosquitoes, glass fiber threads, dust, etc. Form DFM.

Solution: The reduction of DFM mainly lies in the cleaning of the oven, including the oven wall, nozzle, and any dead corners of the air duct. In addition, the personnel in the stacking area must also cooperate with Sorting to pick out small black spots, powder chips, and fibers. Film of silk and other foreign objects.

Analysis of the cause: When using a combination of bulk materials with a high glue content of the film, or a high glue flow, slippage is easy to occur in the pressing industry. In addition, if the temperature difference between the inside and outside of each Book is too large, uneven glue flow is also the cause of slippage. Poor positioning between the substrate and the book in each book will also cause slippage.

Solution: If the film glue content or glue flow is too high, you can change the gluing conditions to adjust. When the glue flow is large, you can adjust the pressing cycle (such as reducing the heating rate, delaying the pressure, reducing the force, etc.). When the temperature difference between the inside and outside of the Book is large, it can be overcome by “reducing the sheet” and reducing the production. As for the poor positioning, it can be improved by paying more attention during operation.

Reason analysis: WKL is most likely to occur on copper foil below 1oz. As long as the staff is slightly uneven during the laying of copper foil, WKL may occur. In addition, the glue flow of the film is too high, and the excessive glue flow during pressing will also cause WKL.

Solution: The flatness problem of copper foil laying can be strengthened by the operation training of the staff. As for the film glue flow is too high or the glue flow is too large, it can be adjusted by the pressing conditions of the Treating Spec.